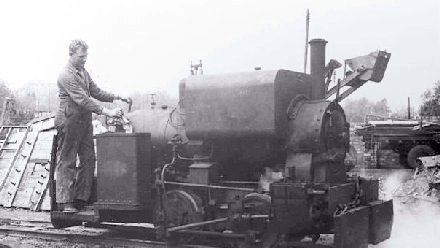 The National Smelting Co, Avonmouth used reduced height Kerr Stuart Wrens to work under their retorts. After testing by new owner Max Sinclair who saved them from the scrapheap, and could not find anyone in this country interested, they went to C. Mathews Ontario Canada.It is hard to believe now but in the 1950's few people wanted a loco and although I was giving them away it was hard to find a recipient.Dozens of fine engines went for scrap. I have just heard from Sweden that most of the locos I photographed have been scrapped. It is so sad as many of them were superb examples.

This loco was exported to the US and stored with three other UK locos by two brothers. Recently one died and all the locos were returned to the UK and restored to working order at Statfold Barn. This loco was fitted with a Kerr Stuart style cab and returned to the surviving brother in the US, named after his sibling.